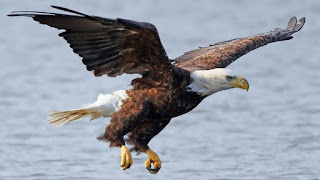 Eagles are some of the largest birds. They are at the top of the food chain, with some species feeding on big prey like monkeys and sloths. Eagles have amazing eyesight and can detect prey up to two miles away. Eagles are birds of prey in the family: there are approximately 60 different species. The majority are found in Eurasia and Africa, with only 14 species found in other areas including North, Central and South America, and Australia.

With the exception of some vultures, eagles are generally larger than other birds of prey. They have strong muscular legs, powerful talons and large hooked beaks that enable them to rip the flesh from their prey.

How far do eagle see?

Sight is the strongest of all eagle senses. The eyes are large, can take up almost 50% of the head, and can weigh the same amount as a human eye. An eagles vision is 4–5 times better than that of a human. Eagle eyes are angled 30 degrees away from centre of the face, which gives eagles a greater field of view. Eagles can see five basic colours to our three, and can detect UV light.Cones are light detecting cells that are sensitive to colour. One of the reasons that eagles have better vision than humans is because their retinas, a layer at the back of the eyeball, have more cones. We have 200,000 cones per square millimetre, whereas eagles have one million.

Eagles are monogamous, so generally mate for life. They have strong site fidelity, so a mating pair tend to reuse the same nest year after year. Nests, composed of sticks, vegetation, and downy feathers, are built by both males and females. Location of the nest varies with species. Bald eagles for example, most likely nest in tall trees whereas as golden eagles prefer cliff faces or more open areas.

How many eggs do eagles lay? 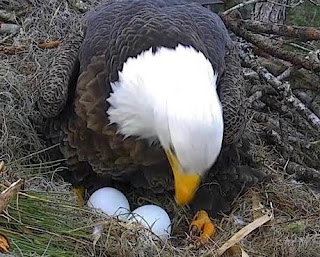 The number of eggs laid will depend upon species, but many eagles lay between one and three eggs; four egg clutches do occur, but they are rare.

What do eagles eat? 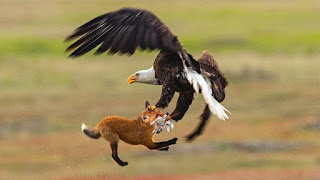 Eagles are apex predators, meaning they are at the top of the food chain. What eagles eat depends upon the species and the food that is available to them, but they are all carnivorous and live on a diet of meat and/or fish.

Popular posts from this blog 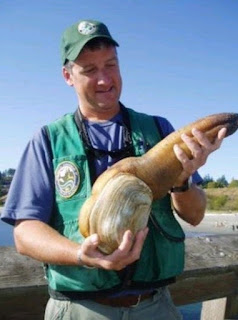 T he Pacific geoduck ( Panopea generosa) is a species of very large saltwater clam in the family Hiatellidae.  The geoduck is native to the coastal waters of the eastern North Pacific Ocean from Alaska to Baja California. The shell of the clam ranges from 15 centimetres (6 in) to over 20 centimetres (8 in) in length, but the extremely long siphons make the clam itself much longer than this: the "neck" or siphons alone can be 1 metre (3 ft 3 in) in length. The geoduck is the largest burrowing clam in the world. It is also one of the longest-living animals of any type, with a typical lifespan of 140 years; the oldest has been recorded at 179 years old. The precise longevity of geoducks can be determined from annual rings deposited in the shell which can be assigned to calendar years of formation through crossdating. Taste So, what does it taste like? Geoduck meat is sweet and clear in taste. Eggs Geoducks are extremely productive, with the long-lived females producing as many
Read more